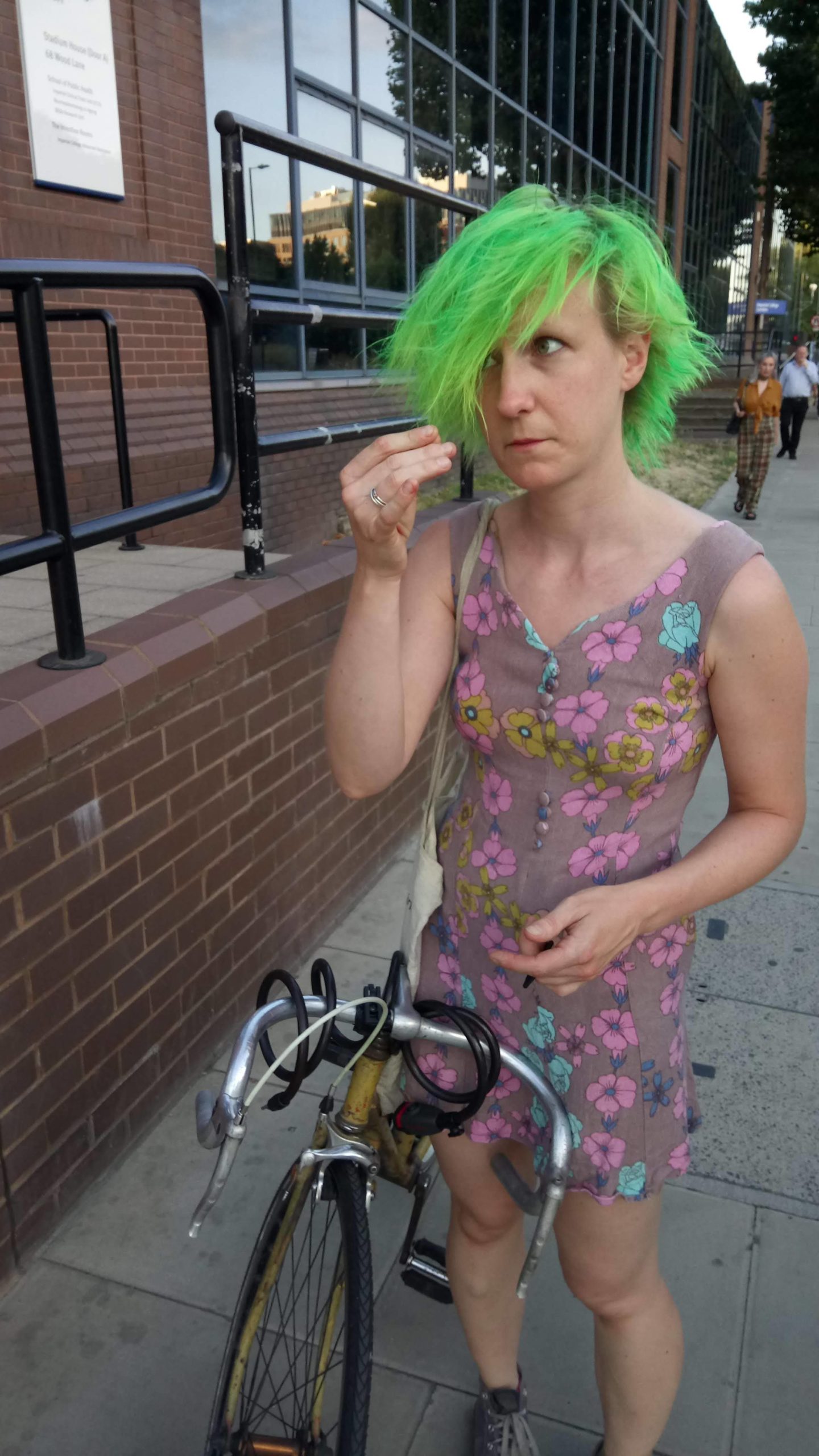 So this is my second letter too you.There was a long break i must admit and you might, by now be dead or been taken away to a better place … like mainland Europe. In any case, how are you, my beauty? I have now moved to a place you surely would have loved and I would have loved riding you here… I’m up high on the hills of London. It’s safe to say that , yes, it would be smarter and healthier to have a bike now with gears, as riding here involves a lot of pushing indeed. But I’m still certain, that at least if I still had you it would be easier to ride up the steepest bits. You were so skinny and so light and flexible.You were though also really fast, so on a downhill dear me with just one break and the rich people up here speeding their big cars up and down … maybe it is after all better for you and I that we’re not together. Not saying I don’t miss you, you know.

The new bike is fine now. It looked all new, shiny and girly when I got it .. and by now it’s quite a big more raggedy, still has a pink chain and purple spokes though. The difference in my relation to it though is massive.. don’t think I’d give this bike as much love as I did to you. No nail varnish, no glitter, no crochet handlebars for when it’s cold, no rice cookers of roses taped to it so far. I can’t complain though… for it’s weight and its’ clumsiness in that sense it’s not so bad really, and my thighs are harder now than they’ve ever been. I wish I could train my abs while riding it… can I ? I’m sure there is a way.

At the moment we’ve got a totally crazy situation at home . Yeh I haven’t even told you, I’m living the Netflix dream.. it seems there is a series on people living in an Ex-old people’s home ( or a hospital? I don’t know I don’t watch Netflix)… and that’s exactly what I’m doing at the moment. You wonder whether it smells odd? no it doesn’t haha the odd smells have long gone from this building, but I do have to say that under the cage that I had over my over boiling heater there was a lot of … what we Bavarians would call ” Wuckerl“…. dust as big as mice. It had almost grown eyes dear me. But when it was gone and the cage was gone too, yay, the room was free and nice and now I can burn incense again without choking. In any case, it’s a crazy situation, where policemen just walked past my door haha… oh don’t worry, bike, it’s not that serious, it’s quite interesting though.

Today is St. Patricks day and whilst I thought that’s all sweet and nice I’ve found quite a few sources in which it says that at some marches they didn’t want LGBT people to join them , dear me. Not unexpected as the Irish do have a tendency to be quite catholic. Oh you’d have loved it if I’d taken you along to one of those parades, after all you were quite green too. And with my hair, we’d have made good friends… at least for the day. When I still lived in Berlin I once actually went to a Paddy’s day parade and to the Irish pub after… the Guinness was 4 Euros per half litre though… intensely expensive in comparison to non Irish beers. I did enjoy the group dance though.

Are you even still green? they might have washed you and taken off the nail varnish … you might be all copper coloured now .. or pretty and white or black. Black would be a shame though as you’ve got all these embellishments. Do you remember when this photo was taken? it was at London Pride a few years ago.. was it 2018? Ah yes it was but it wasn’t Pride itself, it was Pride ride, which was a week before or so. Pride itself, dear me, changed my life forever. It was the first time I packed and the first time I met the male version of the person who has been my partner now for almost 2,5 years. What a beautiful memory. You were home alone when Alex undid his hair for me for the first time and my life went in slow motion. haha … yeh I know cheeesey, but it was like that . Sort of.

In any case, I did something fun today, I took part in another self promotion workshop because I, as a few others too, would like to improve my career… or work life. It’s nice to consider what one’s dreams are and what one’s achievements are and to say them out loud to oneself. One of the tasks was to write a blog post ( if one has a blog, which I do) about one achievement. And I thought yeh ok den , I’ll tell you. Not that you don’t know already anyway.

So yeh, I had a show at Berlin Fashion Week only half a year after graduating form fashion school. That’s quite an achievement I’d say . It was at an event that doesn’t normally offer a Fashion show and yes I did get in there through knowing someone who knows the organiser, but it was still great fun. You’d have loved it in Berlin, but I would have had to carry heavy locks, you’re very stylish, you know.. others would have envied me for you.

So yeh, this fashion show . It was a lot of fun.. and I learned a lot from it. here’s a photo.

I feel like I’m rambling again… almost like the woman who spoke at that self promotion thing.The way she pronounced ” foock being hoomble” though… loved it …. I can smell the corn that’s lying next to me, looks a bit washed out now. Washed out yellow like you were under your fancy new glitter green nail varnish coating.

So yeh, I’ll say goodbye for now and will mingle with the many people I live with here. 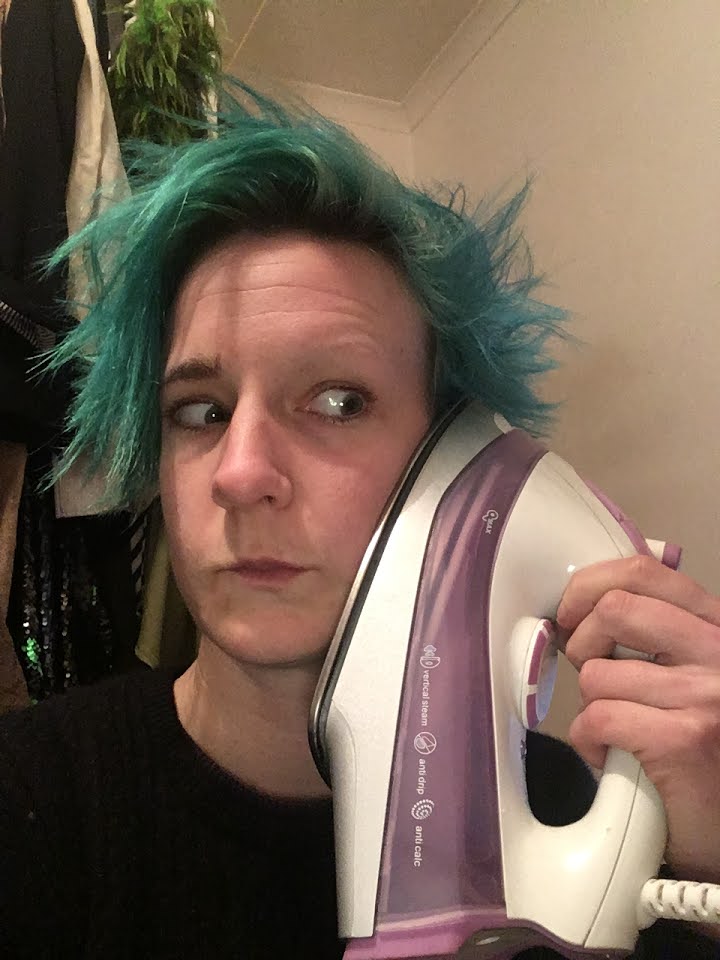